Australia in the Early 1980s

By David Cook and Danny White

The Australian scene was busy in the early 1980s. It was a great period until the closure of the drag strip in Sydney. Here are photos and info on ten of the era’s best. — Updated Sep 8, 2005 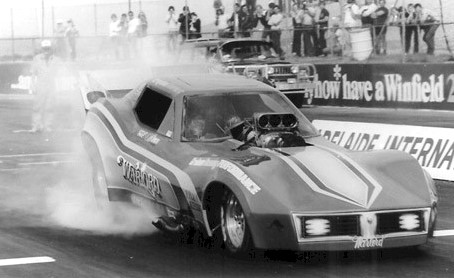 Victorian racer Archie Robertson enjoyed a brief resurgence in his career when he picked up the ride in Steve Brown’s new “Warlord” Corvette in the early 1980s. The “Warlord” had a state-of-the-art Keith Black Hemi for power and ran best times in the mid-sixes. The “Warlord” series of funny cars ran through the late ’80s with a Camaro and Firenza. The team left the funny car class to race Top Fuel dragsters. (Photo and text provided by David Cook) 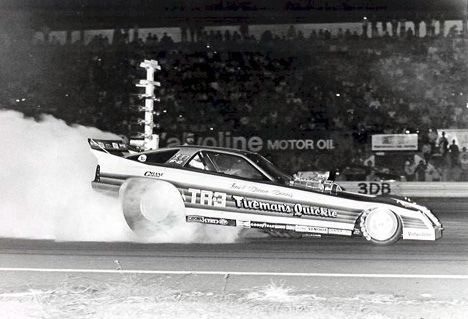 Garth Hogan came to Australia to drive Jim Dunn’s old Horizon in 1983. Hogan had raced the Berry & Hogan owned funny car in New Zealand for years. The Horizon was the car Dunn drove to victory at the NHRA World Finals in 1981. Hogan drove the car for Graeme Cowin and went 6.80s at 210 plus before Jim Walton bought the car and it became the “Thunder Down Under.” (Photo provided by David Cook; info from David Cook and Garth Hogan) 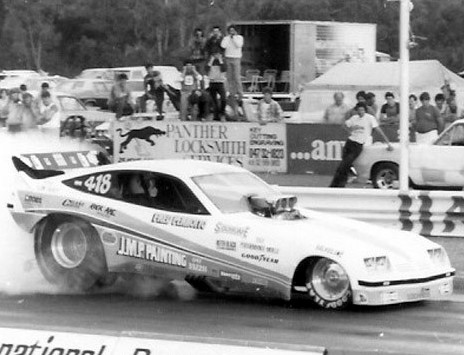 Sydney’s Fred Perrotto ran this ex-Bob Pickett Oldsmobile in the early to mid-80s after graduating from Top Fuel. The car was purchased from Bob Pickett after his tour of Australia. Draglist reports Perrotto ran 7.79 in the Starfire. Perrotto retired after the closure of Sydney’s Castlereagh Dragway. (Info and text provided by David Cook) 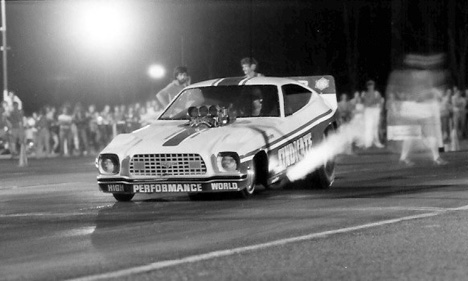 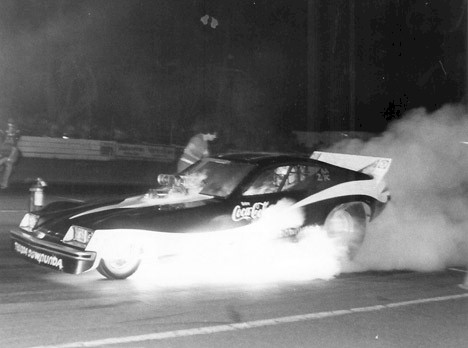 Jim Walton’s most successful FC ride was this Monza. Walton had bought the car from Gary Densham after Densham’s tour of Australia. The Victoria-based racer procured sponsorship from Coca-Cola of Australia. Jim took the Coca-Cola Monza to Nationals wins. He knew that life could go wrong, such as this engine fire during a burnout at the Castlereagh track. This car crashed at Melbourne’s Calder Park on its short braking area in 1982, seriously injuring the veteran racer and almost causing the loss of his legs. Jim returned from the accident to race again, purchasing Jim Dunn’s 1981 NHRA World Finals-winning Plymouth Horizon. Walton raced funny cars into the early ’90s. (Photo and text provided by David Cook) 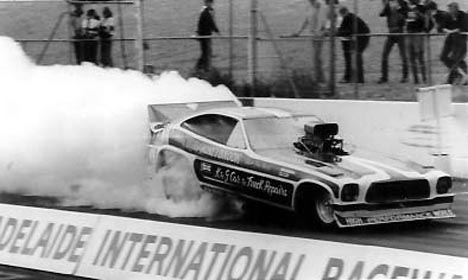 Bob Honeybrook became the new owner of this funny car after it had been built and raced in the United States and shipped to Australia. Jeff Courtie built and raced the car himself in 1975. Patterson and Dykes bought the car after it had been shipped to Australia. Peter Dykes won the ’78 Nationals with the car. Dave Lomas bought the car from Patterson and Dykes and converted it to a BB/FC. Honeybrook and Mario Mariani bought the car from Lomas and kept it as a BB/FC. They raced the car at Castlereagh whenever possible. By 1984, Honeybrook was the sole owner, and he converted the car back to nitro for a race. Rod Bradshaw volunteered his engine and driving skills. The conversion was not successful as Bradshaw banged the blower on the burnout. When nearby Castlereagh closed down in 1984, Honeybrook quit due to the lack of a track close to his home. The car was sold again and was later updated for Americans to drive as the USA Daytona. (Photo courtesy of David Cook; info courtesy of David Cook and Bob Honeybrook) 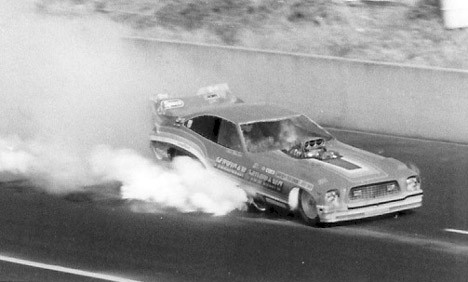 Victorian racer Peter Russo began his nitro career when he bought the ex-Dennis Geisler/Barry Bowling Mustang II. The six-year-old car was well-traveled by the time Peter bought it. Roman Capitanio also took his first ride in the car. Russo is seen here hosing out pistons in November 1984. (Photo and text provided by David Cook) 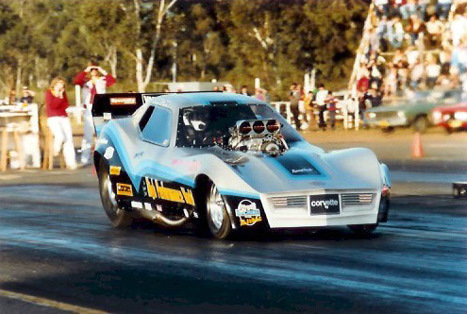 Graeme Cowin’s Corvette of 1983 was regarded at the time as the prettiest FC ever to grace an Australian track. This is September ’83 at Castlereagh. The car had the best equipment that anyone in Australia could buy. Cowin’s Corvette met its end in a braking area fire in October 1983 at Castlereagh. This prompted Cowin to buy Joe Pisano’s beautiful Camaro at the end of 1983. (Photo and text provided by David Cook) 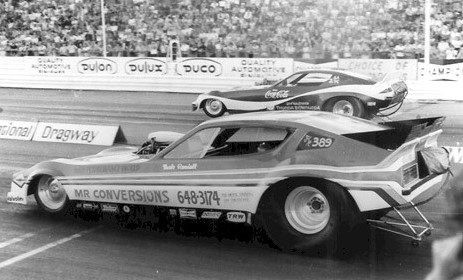 Neale Randall raced three different funny cars during the 1970s but moved to an ex-Graeme Cowin Arrow FC in 1980. The redubbed “Mr. Conversions” Arrow was Randall’s best funny car to date. The Arrow ran a known best of 6.41. Neale is seen here racing against Jim Walton at Castlereagh in January 1981. Randall continued to race through 1984 with a new Plymouth Horizon until the drag strip in Sydney closed. (Photo and text provided by David Cook) 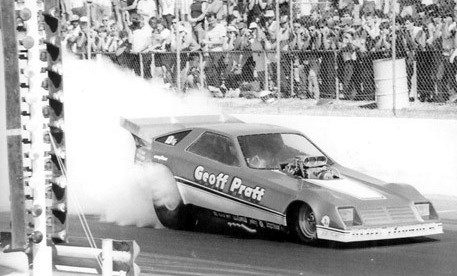 Adelaide’s Geoff Pratt ran this Plymouth Horizon bodied car in 1986. It was Pratt’s first funny car ride. The car was completely destroyed in Adelaide in a serious fire in 1988. Pratt built a new Camaro called the “Blue Thunder,” in which he won the Nationals in 1988. Pratt later put a Cutlass body on the car and a ’23 Model T for AA/FA events. Pratt along with Jim Carter raced the last fuel altereds in Australia. (Text and info from David Cook)