This top ten has little scientific calibration to it. It just the wild leanings of a fuel coupe freak that grew up in the 1980s. Put away that Rubik’s cube and your Atari and enjoy! – Updated August 29, 2005 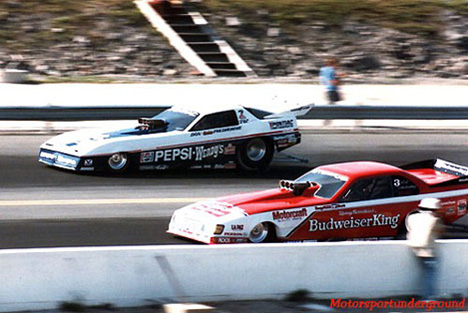 In my opinion, the number one funny car of the 1980s was Kenny Bernstein’s Budweiser King 1985 Tempo. Bernstein used the backing from longtime sponsor Budweiser to advance pro racing in the 1980s for better or worse. Bernstein had busted the 260 MPH barrier in 1984 with his 84 Tempo. This one car set the stage for today’s funny cars. The car underwent extensive wind tunnel testing before hitting the track. The 85 Tempo was the first with the radical 40′ front overhang. The car had dual magnetos, dual fuel pumps, and something hidden under the ‘terrible towel,’ all under the tuning genius of Dale Armstrong. The car was raced over the next two years, winning King Kenny’s first two NHRA World Championships out of the four straight he won. Kenny Bernstein ran a best time of 5.42 at Ennis with the car in 1986 with help from a multi-stage clutch. The top speed for the Tempo was 265.46. (Photo from James Morgan; info from Draglist.com files) 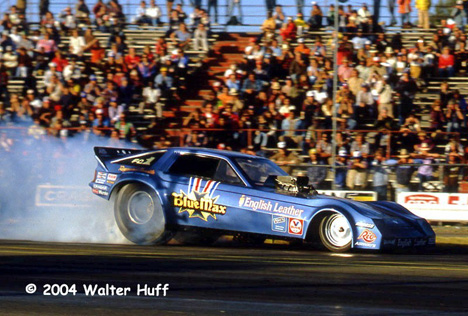 Raymond Beadle was the best funny car racer at the turn of the decade in the 80s. He won three straight NHRA World Championships from 1979 to 1981. The car chosen for this list was his 1981 Plymouth Horizon. It was the car in which he won his last championship and broke into the fives. Beadle won national events in all three major associations. He won the US Nationals in 81. The beautiful car ran a best of 5.92 at 244.86 according to Draglist.com files. I thought the car ran 5.80s. Raymond Beadle was a good racer for the rest of his career, but he did not reach the level of the 79-81 years. The Beadle team with the super crew of Dale Emery, Dee Gantt, and Fred Miller are my number two team. (Photo provided by Walter Huff; info from Draglist.com files) 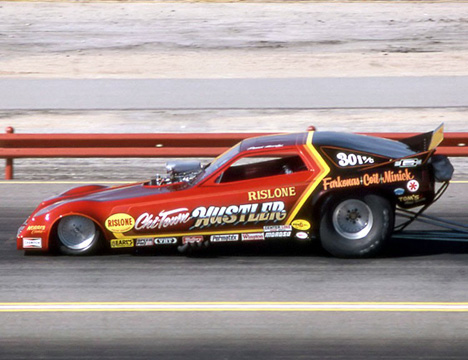 Frank Hawley came out of nowhere it seemed in 1982 to runner-up at the Winternationals with the Chi-Town Hustler. Hawley took the Omni/Charger under the existing national record. The ‘Hustler had been a star on the match race circuit for years, usually shunning national events. By 1982, Farkonas, Coil & Minick knew the match race circuit was drying up and decided to run some national events. Showing that Pomona was not a fluke, the team won at Gainesville in their next race. The team parlayed the good start to the NHRA World Championship in 1982 plus won the Big Bud Shootout at Indy. They repeated in 1983 with four national event wins plus the Super Stock and PHR Nationals titles. The Chi-Town Hustler ran 5.70 at 249.30 in 1983 according to Draglist.com files. Until he got the Chi-Town ride, Hawley was known only in the Midwest as a good alcohol racer. His driving ability and Coil’s tuning were second to none. Hawley went on to open the Drag Racing School and Coil went on to tune for some guy named Force. (Photo provided by Mike Ditty; info from Draglist.com files) 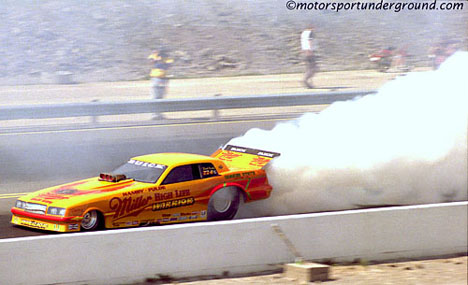 By the time 1985 rolled around, Dale Pulde had been driving funny cars for 18 years. The car that Pulde rides onto this list is the unusual 1985 Buick Somerset Regal. The car looked to be the aerodynamic opposite of Kenny Bernstein’s ‘Budweiser King’ Tempo. Mike Hamby and Dale Pulde built the Miller High Life Warrior Regal that had the aerodynamic look of a brick. The car had the brain trust of Pulde, Hamby, and tuner Bill Schultz. The unique body did not stop Dale Pulde from finishing as the IHRA World Champion and number 3 in NHRA with three runner-up finishes. Pulde had to skip a late-season NHRA race to win the IHRA title, thus knocking him out of the number 2 spot in NHRA. Pulde ran a 5.59 at 263.15 in the Somerset Regal with the beautiful paint job. Many consider it one of the prettiest of all time. (Photo from James Morgan; info from Draglist.com files) 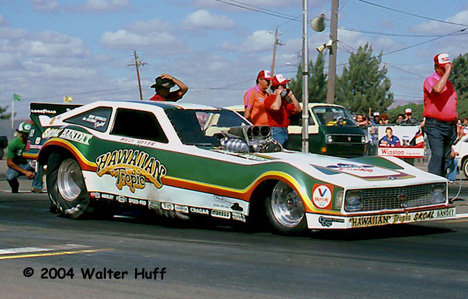 Billy Meyer had one of his best years in 1980 with the Hawaiian Tropic Citation. He was only in his early twenties at the time but was a seasoned FC vet. He finished number two in NHRA and IHRA with the unique body. Meyer won one NHRA race and was runner-up at another. The ungainly Citation body was built for Ron Rice, but Meyer bought the first body from him. Jamie Sarte built the chassis that was powered by a half-inch Keith Black stroker. The ‘Hawaiian Tropic’ car won the Winternationals in 1981 and ran a best of 5.89 at 250. A more aerodynamic Trans Am body replaced the most successful Citation AA/FC in history for 1982. (Photo from Walter Huff; info from Draglist.com files) 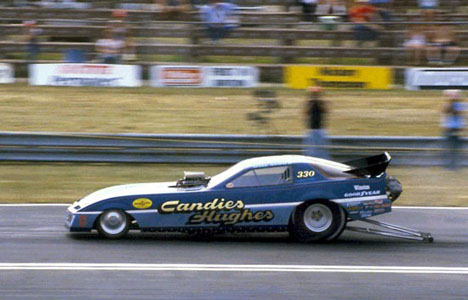 In 1983, the team of Candies & Hughes returned to the funny car wars after racing top fuel for almost ten years. By 1983, Top Fuel dragster popularity had bottomed out. New teams were not building dragsters and existing teams were leaving the dragster ranks for funny cars. Candies & Hughes had Al Swindahl build them a new Trans Am. Team driver Mark Oswald had never driven a funny car. The team DNQ’d at Pomona but after that, they hit their stride. They won a couple of races with the car in 1983 and 84 (three wins and three runner-up finishes). In 1984, they added sponsorship from Old Milwaukee Beer. The red Candies & Hughes car won the 1984 NHRA Championship. Oswald drove the Leonard Hughes tuned car to a 5.62, 262.69 best. This car is currently in the NHRA Museum in Pomona. (Photo courtesy from James Morgan; info from Draglist.com files) 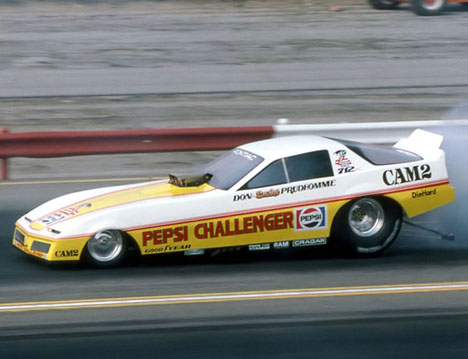 Don Prudhomme laid down the funny car run of the decade at the 1982 U.S. Nationals. The 5.63 run by the Pepsi Challenger Trans Am was almost two tenths quicker than any AA/FC run in history. There were rumors of nitrous oxide, which was completely legal at the time. Prudhomme said in later interviews that the lines were there but not operable. Prudhomme proved the run was not a fluke with another run in the sixties and a run in the seventies. The ‘Pepsi Challenger’ Trans Am should have won more but was hurt by inconsistent performances. Prudhomme did win two NHRA races in 1982 and was runner-up in one more. The 5.63 at 244.56 goes down as one of the great runs of drag history and earns my number seven spot. The car later ran 257.14 mph for its best speed. (Photo from Mike Ditty; info from Draglist.com files) 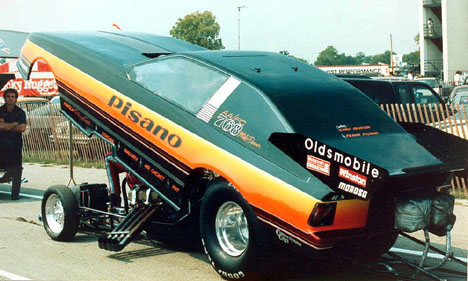 I consider the Joe Pisano owned-Mike Dunn driven Oldsmobile team to be the last great hitter team in NHRA funny car racing. I consider a hitter to be one that was not a regular on the circuit but could win the race as well as any of the big guys. The ‘Pisano’ 1986 Oldsmobile Firenza was built for driver Mike Dunn and was tuned by Pisano and Gary Slusser. The Pisano Oldsmobile Firenza won the 86 U.S. Nationals at Indy for their biggest win and then was runner-up in 87. The team was the first to run 270 and 280 in AA/Funny Car. The car ran a best of 5.37 at 280.72 by 1988. (Photo provided by Dave Ferrin; info from Draglist.com files) 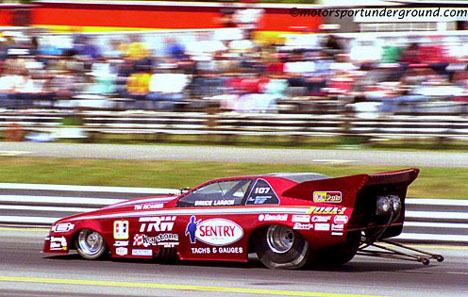 Bruce Larson was the last little guy to win the NHRA Championship in AA/FC. Larson had been known as a good match racer with his ‘USA-1’ cars. By the late 1980s, a person could not make a living match racing. This forced Bruce to race the NHRA circuit. In 1989, Larson built a new Oldsmobile Cutlass with moderate backing from Sentry Tachs & Gauges. The Oldsmobile was a departure for Bruce Larson. It was his first non-Chevy since the early 60s. The crew, led by the late Maynard Yingst, also received tuning help from Joe Amato crew chief Tim Richards. Larson’s team won six races and was runner-up in five more. That enabled them to win the NHRA championship. Larson finally ran 5.13 at 281.45 in the Cutlass, which now resides in the Smithsonian Museum of American History in Washington, D.C. However, pictured is the team’s Chevy Beretta, which, believe it or not, was originally Joe Amato’s Ford Mustang! (Photo from James Morgan; info from Draglist.com files) 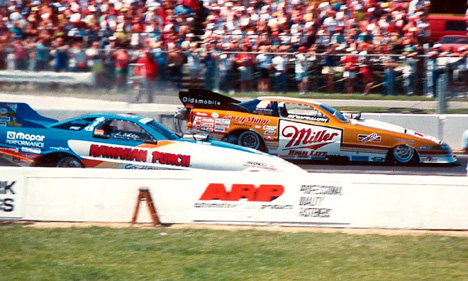 Ed ‘The Ace’ McCulloch makes my list in the final spot. The car he takes to number ten is the Miller High Life 1988 Oldsmobile Cutlass. The Larry Minor-owned funny car had performances that varied wildly from race to race during the 1984 to 1987 seasons, but things improved in 1988. McCulloch won the biggest payday in AA/FC history at that time, earning a $100,000 bonus at the 1988 Chief Auto Parts Nationals because he had won both Ennis races that year. The Bernie Fedderly-tuned machine also won the U.S. Nationals, one other national event, and had two runner-up finishes. McCulloch’s best times with the Cutlass were a super 5.132 at 280.89. (Photo from Dave Ferrin; info from Draglist.com files)