Danny dives into another round of 80s funny cars with the hard-working and hard running match racers from the Northeast that thrilled fans from Maryland to New England. — Updated June 4, 2007 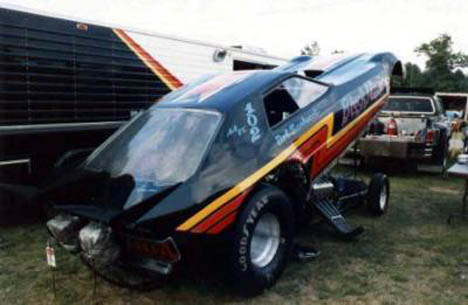 D.A. Santucci bought the Black Magic Vega AA/FC from Jim Beattie in the late 70s, also purchasing the popular name in the deal. The Black Magic Mustang was the third funny raced by the Santuccis. D.A. bought the car from Paul Romine to replace the Omni that crashed off the end of the strip in Suffolk, Virginia. Santucci became a regular in East Coast match races with the Iversen-bodied Mustang. He ran the car through the 1985 season, running a best of 5.85 at the Keystones Nationals. (Photo by Michael Beach, courtesy of Curt Swartz; info from Barbara Santucci and Draglist files) 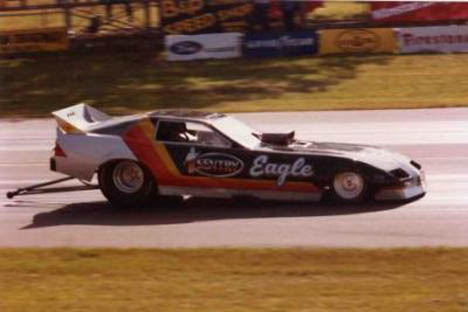 Dale Barlet’s finest hour in fuel funny car came in the Sentry Eagle Camaro. The Sentry Gauges sponsorship was new for 1984 and so was a new Camaro body and fresh parts. Barlet used the 484 c.i. Keith Black motor purchased in 1983 to replace the cast iron Chevy he ran formerly. Dale ran a 5.98 to qualify for the Summernationals after years of struggling with his previous cars. Barlet then duplicated that run with a 5.98, 248 pass at Bristol. Bad luck would return by the end of the year, however, when the Sentry Eagle Camaro burned to the ground during an Englishtown match race. (Photo by Michael Beach, courtesy of Curt Schwartz; info from Draglist files) 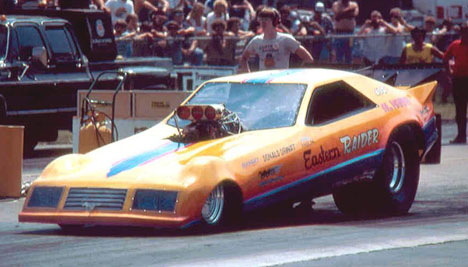 Al Hanna’s last fuel funny car was this beautiful Iversen bodied Mustang. Hanna got some good performances out of the Mustang, hitting a best of 6.10 at 235.60. Unfortunately, two events ruined Al’s season. One was a minor mishap at New England Raceway when a fire erupted on a run. Hanna got the car stopped and the fire extinguished before the car was too badly damaged. However, not long after that, thieves stole the car. Al eventually recovered the car but started thinking about another way to go fast. Hanna built a jet funny car and phased out the Mustang. (Photo courtesy of Al Booton; info from Draglist files) 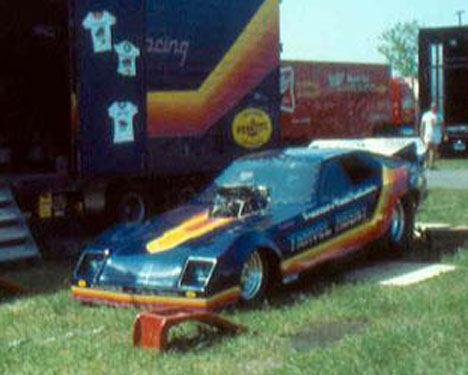 Frank Mancuso and his Travel Agent cars were one of the best independent fuel funny car acts of the early eighties. Mancuso managed to qualify for a couple of NHRA races, but he is better remembered for solid match racing efforts. The 120″ wheelbase Omni was owned by Mancuso, Novak, & DeLucia. A Keith Black Hemi powered the black Dodge to a best of 6.15 at 222. (Photo courtesy of Al Booton; info from Draglist files) 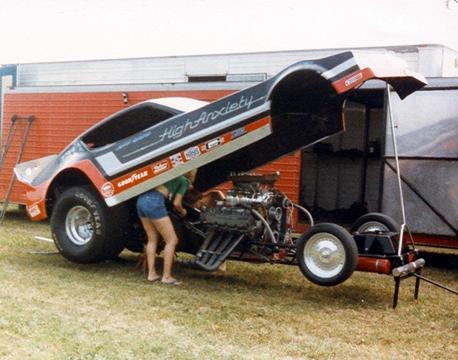 Jeff Rapp is best known for winning a couple of NHRA national events in a successful top alcohol dragster career. In 1982, Jeff took a foray into nitro funny car racing with tuning help from Top Fuel racer Tony Ceraolo. The team ran the High Anxiety Arrow infrequently, hitting a best of 6.07 in 1982 and 233.60 in 1983. By the end of 1984, the car was parked and put up for sale. Rapp returned to top alcohol dragster racing and enjoyed much success by the end of the eighties. (Photo courtesy of John Kilburg; info from Draglist files)

John Speelman’s Blue Bayou Challenger was his second car with that name. He named the car after one of his wife’s quarter horses.  The great Bill Barrett tuned the Keith Black powered machine to good performances. The Maryland team was a regular in Northeast fuel funny car races from 1979 to 1981, achieving success in Division 1 events and local match races. Speelman ran best of 6.29 at 230.76 according to Draglist files. A new Trans Am replaced the Challenger. (Photo courtesy of D. Chyoak; info from Draglist files) 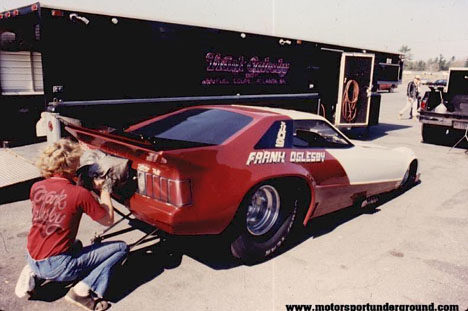 Frank Oglesby had been around since the birth of funny cars, first as a crew member and later as a hired driver. In the seventies, Frank built his own funny car called the Quarter Horse. The car in the photo was the last funny car Oglesby drove. The Keith Black powered Mustang had yet to receive its new lettering after Mello Yello soda pulled its sponsorship. Frank match raced the beautiful red and white Mustang until 1982. According to Draglist files, Oglesby ran a best of 6.06 at 230.79 at Union Grove while running the Mello Yello colors. Frank retired at the end of 1982, but he built a new funny car. Oglesby attempted a recent return to racing in the mid-2000s but was sidetracked due to lack of funding. (Photo courtesy of James Morgan; info from Draglist files) 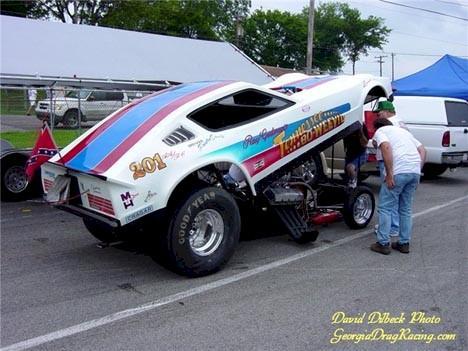 Preston Davis was one of Southeast’s best fuel racers in the late sixties and early seventies. He drove for Ray Godman in the Tennessee BoWeevil during this period with much success. Preston retired from driving while Godman continued to race with other hired drivers. Davis returned in the 80s to race Godman’s latest Tennessee BoWeevil, this one a Plymouth Arrow. Godman raced the car infrequently and soon parked it. Preston returned to retirement. With the classic funny car boom of the mid-2000s, Ray Godman brought the car out of retirement to use as a cackler at nostalgia events. (Photo courtesy of David Dilbeck and www.georgiadragracing.com; info from Draglist files) 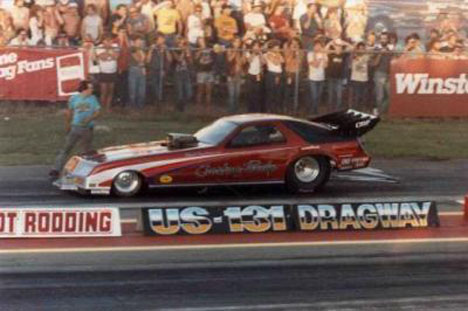 Paul Smith is one of the most famous independent racers of all time. He was also a highly desired hired driver. In the mid-eighties, Smith was the driver of choice for the famed Castronovo Bros. Custom Body Enterprises Daytona — four different times! The photo shows the second go-around for Smith and the Castronovo Bros. Paul had driven the Utica Flash in 1984, 1985, 1986, and 1987, but never for a whole year. In 1984, Smith began the year in his own car, but he crashed at Gainesville and finished the year in the Custom Body car. In 1985, Smith left to drive Bill Dunlap’s Capt. Crazy Tempo, but returned to the Castronovo camp for the end of the 1985 season and the beginning of the 1986 season. Smith left the team in mid-1986 to drive the Nitro Fever Corvette and then returned to drive the final Custom Body Daytona in 1987. Paul brought some success to the team over the years; he ran a best of 5.73, 255 in the Daytona at Indy ’85. (Photo by Michael Beach; courtesy of Curt Swartz; info from Draglist files) 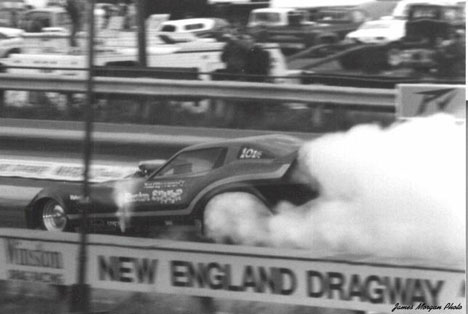 Kosty Ivanof had already been driving funny cars for over a decade and had gone through several partners by the time the Boston Shaker Corvette was built. The beautiful ’79 Corvette was powered by the rarely used Milodon Hemi built by Don Alderson. Kosty’s high point in the car had to be when he qualified number one at the 1980 NHRA Winternationals at Pomona with a great 6.05, 243.90. Ivanof later received sponsorship from Miller Beer and changed the name of the Corvette to the Miller Super Shaker. Ivanof lost the Miller sponsorship and parked the car. (Photo courtesy of James Morgan; info from Draglist files)