This round of 80s Funny Cars covers more of the European funny cars. In fact, all these cars came from England with the lion’s share from the Roy Phelps stable. — Updated November 30, 2008 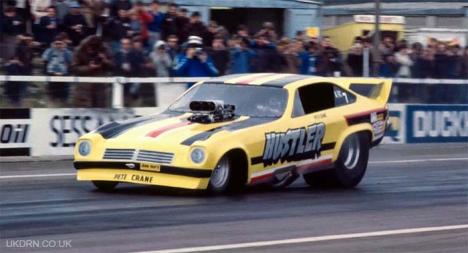 Peter Crane was the first European to run in the fives with the Stormbringer dragster in 1976. By 1980, Crane was persuaded to switch to the funny car class by Santa Pod’s Roy Phelps. The former Gladiator was repainted like the Terenzio Bros. Hustler BB/FC funny car in the United States. This happened because Phelps got a deal from the American toy company that made the Hustler pull string funny car. Roy sold the toy at his concession stands. The experience was not as happy for Crane. The Hustler did not perform up to Peter’s standards, running only a 7.78 at 193, and prompting him to vacate the seat at the end of the year. The car continued to run under different paint jobs and drivers for Phelps. (Photo by Paul Garland, courtesy of Jon Spoard / ukdrn.co.uk; info from Draglist files) 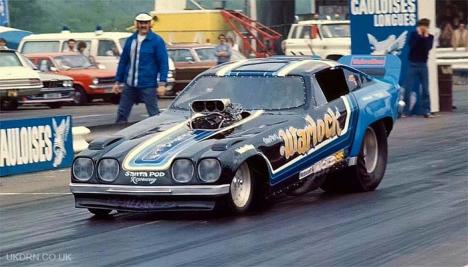 The Warlock was the team car to the Hustler in 1980 as a part of the toy deal Roy Phelps had negotiated. Phelps had bought the Pup, as the Vega was called, from Nobby Hills, and put former Houndog Top Fuel driver Alan Bates in the car. Dave Prior, husband of Top Fuel racer Roz Prior, called the tuning shots on the car. The Milodon Hemi powered car did not perform as well as it had when it was the Houndog and the team soon split up. Prior continued to run the car into the mid-eighties with his son and daughter at the wheel of the aging machine. Bates went on to drive for Nobby Hills at the end of the eighties, recording the first five by a funny car in England. (Photo by Paul Garland, courtesy of Jon Spoard / ukdrn.co.uk; info from Draglist files) 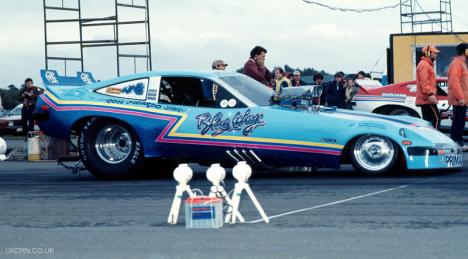 Gene Snow’s Monza ended up in the hands of Ron Picardo. Roy Phelps imported the Monza into England for Snow to drive at Santa Pod. Picardo test-drove the Roy Phelps owned car and found it to his liking. Ron repainted the Monza as the Force in 1979 and ran a 6.98 in the car. In the early eighties, he updated the car with a Datsun front end, renamed it the Blue Samurai, and ran it on alcohol. Picardo then renamed the car as the Blue Way and ran it on nitro as shown here. The car ended its career as a Jaguar called the Super Cat. (Photo by Paul Garland, courtesy of Jon Spoard / ukdrn.co.uk; info from Draglist files)

Tony Boden had raced Dennis Priddle’s dragster as the Hit Man before getting a funny car. Boden imported the Len Imbrogno Centurion Omni from Ohio. Tony ran it a few times as the Centurion before repainting the car. The Hit Man ran a best of 6.27, which amazed the British drag racing scene after Tony’s previous efforts. Boden raced the Omni with several different paint jobs and sponsorships. In this photo, the beautiful Omni is running as the Hit Man. Tony was involved in a terrible crash and fire in 1986 at Hockenheim, Germany, and succumbed to his injuries. (Photo by Paul Garland, courtesy of Jon Spoard / ukdrn.co.uk; info from Draglist files) 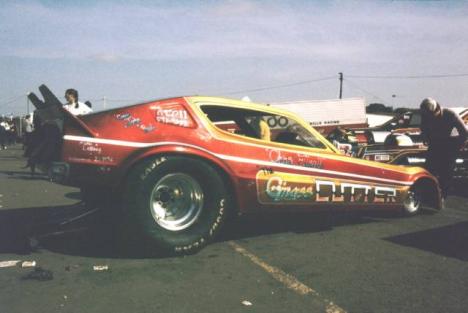 Chris Filsell was one of the many drivers employed by Roy Phelps. Filsell was given a tryout at the wheel of the Rain City Warrior alcohol funny car. Filsell passed the test and took over the wheel of the former Gene Snow Plymouth Arrow. The car received a new paint job and a nose, turning it into a Dodge Omni. This was done to make it different from the Phelps’ Cannonball machine. Filsell drove the car as the Grass Cutter and as the Satan’s Sledge, the latter name resulting from a contest held by Santa Pod Raceway. Filsell ran a good 6.35, 221 in the car before retiring from racing. (Photo by Alan Currans, courtesy of Alan Currans / theaccelerationarchive; info from Draglist files)

The Mad Max Vega was getting long in the tooth at the time of this photo. The car had a long pedigree, beginning as the 1974 Chadderton & Okazaki Vega that was imported into Great Britain by Roy Phelps. Alan Herridge renamed the car the Gladiator and raced it from 1976-79. Peter Crane ran the car in 1980 as The Hustler. The Vega was converted to alcohol where Chris Filsell and Bill Sherratt drove it as a tryout to drive Roy Phelps’ nitro cars. Geoff Bosworth brought the car out of retirement in 1985 and ran it a couple of times over the next few years before parking the venerable machine for good. (Photo by Paul Garland, courtesy of Jon Spoard / ukdrn.co.uk; info from Draglist files) 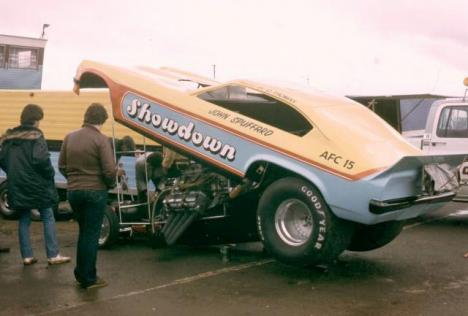 John Spuffard is now the quickest and fastest funny car driver outside of North America at the wheel of the Bob Jarrett owned Showtime funny car. Spuffard had a humble beginning in his nitro career at the wheel of the Showdown Vega in 1985. The Donovan Hemi powered machine ran a best of 7.16 at 200 in British action, but was short-lived, running only a couple of races. John soon replaced the Vega with a newer Challenger formerly raced by the Houndog team. Spuffard later gained fame at the wheel of the Showtime flopper. (Photo by Alan Currans, courtesy of Alan Currans / theaccelerationarchive; info from Draglist files) 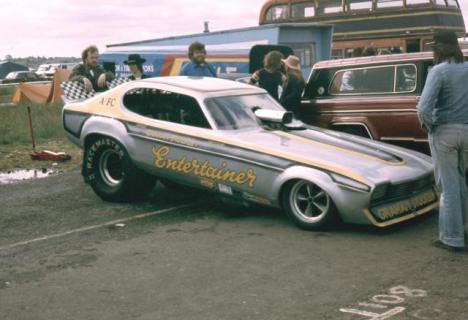 Graham Stockley got into funny cars in 1980 but did not race in the class for long. Stockley was a one of a kind person, who, according to his daughter, once faced down a motorcycle gang and survived. Graham bought the former Sneaky Gloworm Capri that Phil Elson raced both as a funny car and as the Sneaky T fuel altered. Stockley entered the aging car in the largest funny car race ever held outside of America. Graham did not qualify the Entertainer at Santa Pod that weekend and was out of funny car racing by 1981. (Photo by Alan Currans, courtesy of Alan Currans / theaccelerationarchive; info from the Graham Stockley family and from Draglist files) 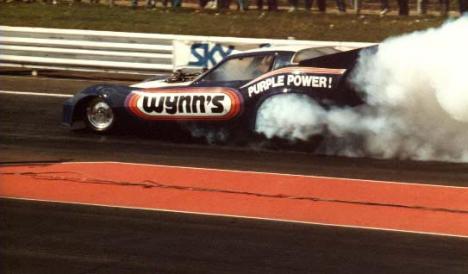 Santa Pod’s Roy Phelps imported Tom Hoover’s 1978 Showtime Corvette, as he did many other American funny cars. Hoover continued to drive the Jamie Sarte built the car for Phelps well into the mid-eighties with paint matching his American ride. The Corvette later was repainted and got a new driver as well. British racer John Niedowitz stepped into the cockpit of the Wynn’s Purple Power Corvette and ran 7.78, 191 before taking over the reins of the Cannonball Arrow. Jim Whelan later bought the car and began his funny car career. (Photo by Paul Garland, courtesy of Jon Spoard / ukdrn.co.uk; info from Draglist files) 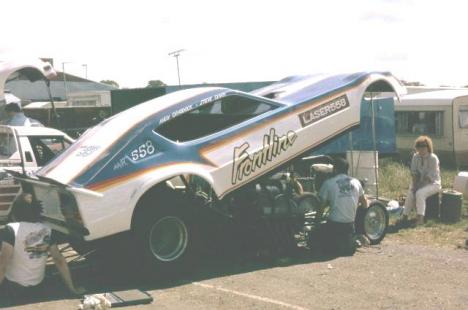 Andy Craddock began his nitro career at the wheel of the Radio Caroline Top Fuel dragster. He then bought the Grass Cutter / Satan’s Sledge from Roy Phelps to add a funny car to his team. Craddock repainted the Arrow/Omni in the Frontline Video colors. Andy ran the car in 1985 and 1986, hitting a best elapsed time of 6.26 seconds. (Photo by Alan Currans, courtesy of Alan Currans / theaccelerationarchive.co.uk; info from Draglist files)