By Danny White and David Hapgood

The Northeastern United States has always been a hotbed of funny car racing, and these ten machines continued into the early 80s. — Updated Mar 26, 2006 The Custom Body Enterprises name is one of the most famous names in funny car history. The name is also synonymous with winning, good-looking race cars. The team’s 1981 Dodge Omni was no different. The Castronovo Bros. chose Rick Johnson to drive the rainbow-striped car. Johnson had been the driver for the ‘Beartown Shaker’ in the late seventies. Johnson also brought his experience as a superior crew member. The Castronovo Bros. had Bob Gerdes at Circus Custom Paints lay down the colors. The car had the ½” stroke Keith Black Hemi for power. Johnson ran a best of 6.00 at 241.28 with the car. In 1982, the car got a new paint job and driver. (Photo courtesy of David Hapgood; info from Draglist.com files) Roy Harris went from the penthouse at the start of the decade to the outhouse by 1982. In 1980, Harris was driving Tom Ryan’s well-funded funny car complete with a tractor-trailer rig. By 1982, Harris was racing alone again. After burning a nearly new ‘Brutus’ Omni to the ground, Harris repurchased his former Arrow. He even brought back his ‘Rapid Roy’ name from the early seventies. Roy raced the Arrow in the Northeast area in match races for the next couple of years. He ran a best of 6.07 at 243 after renaming the car as ‘Brutus’ in 1984. A new ‘Brutus’ Thunderbird replaced the Arrow in 1985. (Photo by Michael Beach courtesy of Curt Swartz; info from David Hapgood) The ‘Agitator’ team of Seifert and Moyers began funny car racing in the seventies with a Vega. The low-buck team replaced the Vega with this new Arrow. The beautiful car might not have set low elapsed times or won many races, but it was a consistent performer in the mid-six second range. Bob Seifert took the Arrow to best times of 6.40 at 228.42. (Photo courtesy of David Hapgood; info from Draglist.com files) Al Hofmann’s first funny car was this hand-me-down Vega. The Connecticut based racer made the big jump from Modified Eliminator to funny cars. Hofmann bought the car from the famed Radici and Wise team out of St. Louis. Paul Radici drove the first few match races, then Hofmann took over the seat. Al’s first few years in funny car racing were rough, crashing and burning a few cars along the way. The ‘China Syndrome’ Vega was no different. It had to be replaced after a fire destroyed it. Hofmann did run 6.35 at 222 in the car before the accident. (Photo courtesy of David Hapgood; info from Draglist.com files) Ric Deschner has owned this Monza for over thirty years. The ‘Underdog’ has changed very little since then. Deschner built the chassis and the cast iron 427 Chevy himself in 1975. In fact, Ric did everything on the car except the paint job, which was handled by Circus. Deschner has raced the car off and on since then, often qualifying and making money at 1980s IHRA shows. Ric started out in New York but has since moved to the Carolinas. The ‘Underdog’ ran a best of 6.55 at 218 at Atlanta way back in 1978, suffering a fire on the run. Deschner now has his own private drag strip to test the car. (Photo courtesy of David Hapgood; info from Draglist.com files) The ‘Holeshot’ was Jerry Caminito’s return to funny car racing. Caminito was a serious funny car match racer from the 1960s. Jerry ran the car in East Coast match races and at an occasional national event. The Arrow had the typical setup of the day: a half-inch stroker Keith Black Hemi, 8-71 supercharger, cast iron heads, and a 2-speed planetary transmission. Caminito raced the great looking car from 1980 to 1983, hitting best times of 6.20 at 220. (Photo courtesy of David Hapgood; info from Draglist.com files) At first glance, you might think this is a Dodge Challenger, but it is a Plymouth Sapporo, the forgotten cousin of the Challenger. This 1979 Sapporo was the last funny car that Tim Kushi raced in a long line of ‘Yankee Sizzler’ machines. Kushi built the car to replace the Monza in which he T-boned Tommy Ivo in 1978 at New England Raceway. Tim raced the beautiful ‘Yankee Sizzler’ Sapporo for the next two and a half years, hitting best times of 6.44 at 220 in match races. In 1981, Kushi tried to get the sponsorship of Miller Lite beer, and he repainted the car in Lite Beer colors. The sponsorship deal never happened, and Tim sold the funny car to Al Hanna. Hanna’s funny car had been stolen, and he had match race dates to complete. Al Hanna raced the dates, then sold the car to go jet car racing. (Photo courtesy of David Hapgood; info from David Hapgood and Draglist.com files) 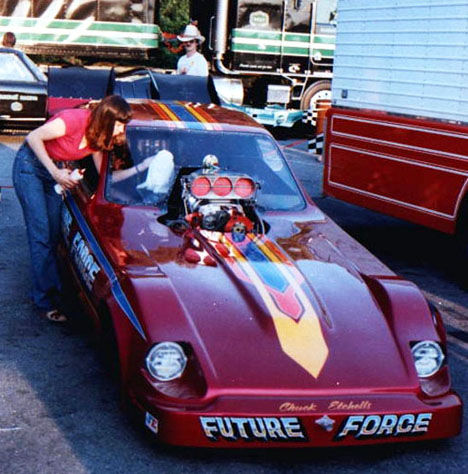 Chuck Etchells began racing funny cars with the ‘Future Force’ Monza. The Etchells family’s textile business took a downturn, and Chuck began to match race the funny car to help make a living. The ‘Future Force’ was a match race regular from 1981 to 1983, first in the Monza and then in this new Datsun 280ZX. Etchells was always a consistent performer. He ran hard enough to make every round and to save the parts for the next match race on the schedule. The team ran best times of 6.17 at 227. Chuck was one of the few to escape the little known Datsun curse. Like the ‘Corvette Curse,’ almost every Datsun bodied funny car crashed. Etchells started a new company called Union Engravers that produced linoleum cylinder engravers. The new company’s success allowed Etchells to join and enjoy success on the NHRA tour. (Photo courtesy of David Hapgood; info from Draglist.com files) The King & Marshall Duster was brought out of storage in late 1980, even though it was built in the early 1970s. Jimmy King took this once-revolutionary beast (the first 125″ wheelbase car and the narrowest FC ever) for a spin at Epping in September 1980, and it nearly cost him his life. The following has often been said about perfectly salvageable race cars, but in this case, it was true: all that remained of the Duster shell at the end of the day was the nose, and it was little more than a foot in length. The rest was scorched tin and ash. King had parked his familiar Monza at the end of August 1980 in order to resurrect the Duster, which on that fateful day, he claimed, “Goes straighter than any race car I’ve ever driven.” King was a fierce competitor behind the wheel, but nothing could save this ill-fated vehicle after it kicked out three rods at half-track on its first full pass in many years. The ensuing blaze and fuel tank explosion in the shutdown area landed Jimmy in a burn ward for well over a month. King later admitted that he was lucky to have lived through the accident. (Photo and text courtesy of David Hapgood; info from Draglist.com files). In 1980, Al Segrini got one of the first major non-automotive sponsors in drag racing. The Brut Deodorant Company enabled Segrini to form his own team and quit his ‘hired gun’ job for the Castronovo Bros. Al bought a tractor-trailer rig and went first class all the way. The ‘Super Brut’ Omni was built in 1981. The beautiful car was immaculate and not cluttered with stickers. Segrini got the ‘Super Brut’ to match its looks with solid top ten performances in 1981 and 1982. Al ran a quick 5.91, 245 best clocking with the Dodge. (Photo courtesy of Mike Ditty; info from Draglist.com files)