Ralph Reiter shot many funny car match races at Seattle during the 1980s, and he shares them here with Draglist readers. The story covers almost the whole decade of the ’80s and those who raced fuel funny cars on the West Coast during that time.   — Updated August 26, 2007 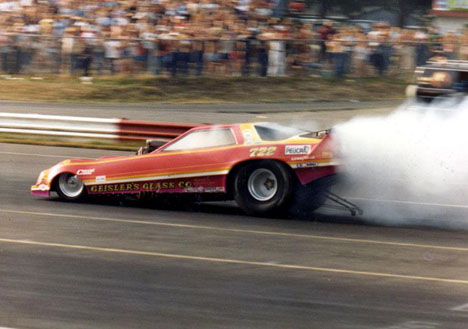 Dennis Geisler debuted this colorful Challenger funny car in 1980. The new Challenger replaced a Mustang II that Dennis sold in Australia after his tour in 1979. The new car featured the Cowboys Hot Dogs sponsorship for two years. The car was mostly financed by Geisler’s glass company. The former AA/FA racer ran the Challenger for four years mostly on the West Coast. Like most fuel altered racers, Geisler did not find the success level he had in the altered class. The Challenger ran a known best of 6.08 at 239.36 in 1981. The car featured the Don Alderson Milodon Hemi for power, unlike the usual Keith Black. Geisler retired from funny cars in 1983. (Photo by Ralph Reiter; info from Draglist files) Schoolteacher Gary Densham debuted this nice Datsun Z in 1980. But did the Datsun Z funny cars have a jinx? It seemed that most of these funny cars like the early Vettes crashed or had other mishaps. Densham was no different as the original Datsun burned to the ground at the NHRA World Finals at OCIR in 1981. The car was rebuilt and rebodied by the famed chassis builder Ken Cox and is the version pictured here. The car ran the Keith Black hemi with which Gary ran a known best of 6.08 at the Seattle 64 Funny Car race in 1982. Densham replaced the Datsun with a Dodge Omni in 1983 after touring Australia. He sold the car to Jim & Steven Reed, who ran it as a BB/FC for many years. (Photo by Ralph Reiter; info from Draglist files) Tom McEwen is one of the most popular racers of all time. McEwen used that popularity and business savvy to get the Coors sponsorship in 1980. He ran the Coors banner for eight years until the end of the 1987 season. McEwen ran a 5.89 at 249.30 with this Corvette at the 1982 AHRA World Finals at Spokane. The Mongoose backed that run up the next year with a 5.93, 247.93 at Indy, qualifying for the fastest funny car field ever at the time. McEwen won the 1983 AHRA World Championship in the car before parking it. He built a new aerodynamic Corvette for the 1984 season. (Photo by Ralph Reiter; info from Draglist files) Henry Harrison drove many cars during his career and one of the best was the Lidtke Bros. Trans Am. The team had raced Top Fuelers, AA/FCs, and AA/FAs at one time or another — they knew the power of nitro. Duane Lidtke had built one of the first dual fuel pump setups in nitro funny car racing. This allowed the car to run killer times in its limited appearances. The team scored their biggest win at the 1983 Bakersfield March meet. Harrison ran 5.88 at 248.48 in the Good Ol’ Boys Trans Am. The team ran the car until late 1984, touring Australia with new driver Rocky Epperly. The team retired after the tour was finished. (Photo by Ralph Reiter; info from Draglist files) Mike Reynolds is best remembered for driving Top Fuelers in the seventies and for being one of the first five-second racers. The Utah based Reynolds is also known for having a wife that raced, too. JoAnn Reynolds raced Top Fuel and funny car for a couple of years herself. Mike had driven a Cougar funny car early in his career and finished up in this Mustang funny car. Reynolds ran the Western match race circuit, running places like Salt Lake City, Denver, Boise, Seattle, and other booked in events. The beautiful Mustang ran a 5.98 at 242.58 in 1984 during one of these match races. Mike Reynolds retired from racing in 1985. (Photo by Ralph Reiter; info from Draglist files) The Desert Rat is a famous funny car team out of Arizona. Ron Sutherland owned the team and drove at first. Ron quit driving and used hired drivers like Chris Lane, but returned to driving at the end of the eighties. The team raced an old Corvette until the end of 1985. In 1986, they debuted this Buick Somerset Regal built by Johnny West. Dale Pulde had debuted this body style in 1985 with much success. The Desert Rat team had some success of their own in match races and the occasional NHRA race. Chris Lane drove the unique Somerset Regal to a good 5.75 at 247 in 1987. In 1988, the team built a new Corvette to replace the Buick. (Photo by Ralph Reiter; info from Draglist files) John Force in 1986 was not the legend or icon he is today. Then Force was another struggling racer trying to win his first NHRA race after many runner ups and running other races when he could. Austin Coil was in his second year working for Force after leaving the Chi-Town Hustler. The team had moderate success with the Coca Cola USA Cavalier. The team’s backing was good but not great in 1986, but that would change in 1987 with the arrival of Castrol. Even though he won no races that year, Force ran a good 5.643, 264.00 in the Cavalier with a Keith Black/2 speed combination. (Photo by Ralph Reiter; info from Draglist files) Jack Holsey was a good West Coast alcohol funny car racer. Jack wanted to do the same in nitro funny car, but he didn’t reach the same level of success. The Ford Tempo Holsey built in 1986 was the third fuel funny car team Jack had put together in the eighties. The Holsey & Elson Tempo was said to be built with the best that was offered in ’86. The team suffered through several DNQs but did get into the field at the Mile High Nationals. The colorful Wacky Racer ran a known best of 5.822 at 249.30 in 1987. Holsey left the fuel ranks for good and had much success in the new Pro Mod class and in nostalgia racing. (Photo by Ralph Reiter; info from Draglist files) Ricky Ruiz dared to be different in the eighties. Ruiz had been successful in the alcohol class, and in 1983 he tried to run AA/FC with his TA/FC on nitrous. The experiment failed when it was met with grievances from other nitro racers and parts breakage. In 1984, Ruiz switched to nitro full time. He built this new Nevada Rattler Mercury Cougar with Milodon power. Ricky ran a 6.12 at 233 in 1984 with the car but struggled for the next few years trying to recapture the combination. Ruiz ran the car either as an AA/FC or a transformer AA/FA. In 1987, the Mercury Capri burned to the ground during a match race with the Texas Ranger of Roger Langson at Englishtown, New Jersey. Ricky returned to enjoy success in match race AA/FA racing in the new millennium. (Photo by Ralph Reiter; info from Draglist files) John Lindsay’s Impulse funny cars have always been low on bucks, but high on effort. By the mid-eighties, Lindsay had been racing funny cars for over a decade, financing the car through the sales of tools. John drove the cars at first, but later used hired drivers. This particular car ran an Odyssey Corvette body in AA/FC races and a swoop back T body for AA/FA races. Bryan Raines was the driver of choice for the Impulse team.  Raines ran a best of 6.04 at 242.58 in the Keith Black powered Corvette. (Photo by Ralph Reiter; info from Draglist files)